Boynton Beach fishing is as good as it gets. Located just a few miles from the bountiful Atlantic Gulf Stream, Boynton Beach is serviced by two local marinas. The legendary Gulf Stream is abundant with a wide variety of delicious saltwater fish including Sailfish, Marlin, Blackfin Tuna, Wahoo, Dolphin (known elsewhere as Mahi-Mahi), King Mackeral (high in Omega 3!), Red Snapper, Yellowtail Snapper, Sheepshead, Pompano and Bluefish. You can charter a boat, or hop aboard a driftboat and within thirty minutes you’ll be dropping your line into the Stream! 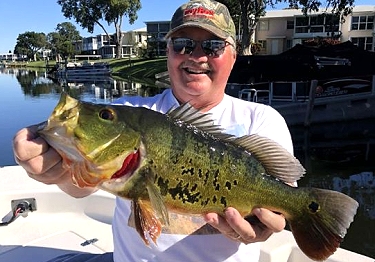 With Lake Osborne to the north, Lake Ida to the south and countless canals criss-crossing in between, Boynton Beach is a freshwater angler’s paradise! Largemouth bass, Sunshine bass, Peacock bass, Bream, Bluegill and Catfish abound in plentiful numbers. On top of it all, one of America’s largest freshwater bodies, Lake Okeechobee, is located only an hour’s drive to the Northwest (where you’ll also find some of the tastiest Catfish restaurants in the South!). You can fish like the pros by renting a small boat and using a rod & reel, or just take along a $3 cane pole, float and a cup of earthworms. Find some shade to sit under, cast out the worm and it won’t be long before you’ll see that plastic float slip under the water!

These are your best Boynton Beach fishing bets for each month.
Note: Grouper and Snapper are plentiful every month of the year.

July
Freshwater: Peacock Bass, Bluegill and Clown Knife.
Offshore: Similar to June. Fish in the morning or at night to avoid the heat.