If you follow Ocean Avenue towards the ocean you’ll eventually come to the end of the road at AIA. Turn left, and you’ll find the entrance to Boynton’s beach. However, if you were to follow Ocean Avenue straight across A1A  you’ll see… well, you’ll see nothing (actually, you’ll be staring at a tall concrete wall surrounding a private residence).

Around the turn of the century you would have strolled right onto the emerald grounds of the Boynton Beach Hotel. A stately, massive wooden structure and the reason for winter-plagued Northerners to traverse hundreds of miles through sub-tropical wilderness to visit Major Nathan S. Boynton‘s sunny beach. 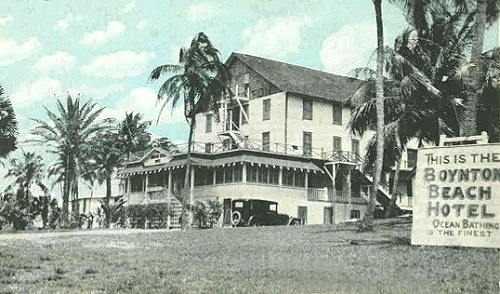 Construction of the Boynton Beach Hotel began in 1896, two years after Boynton purchased 500 acres of land (at $25 a pop) and a mile stretch of ocean frontage. Most of the workers came from Boynton’s home state of Michigan and purchased lots west of the Florida East Coast Canal (now known as the Intracoastal Waterway). At the time, the area now known as Boynton Beach had less than fifty permanent residents and the sudden influx of workers helped put the fledging community on the map. More importantly, most of those that came to build the hotel stayed behind and cleared the palmetto brush to farm tomatoes, pineapples, peppers, beans and cabbage.

When completed in 1897, the Boynton Beach Hotel consisted of a main building, an annex and five cottages that in total housed a hundred guests. By 1896, Henry Flagler’s Florida East Coast Railroad reached Biscayne Bay (Miami) and facilitated travel from the north. Traveling east to the oceanfront hotel was another matter. Until 1911 you had to cross the Florida East Coast Canal in a hand-pulled barge called a lighter (luckily, the canal was much narrower than the Intracoastal is today) and then walk the distance to the hotel. Unfortunately, there was no road only a foot path. So, Nathan Boynton built one out of shell rock (all the way to the train station) and Ocean Avenue was created. 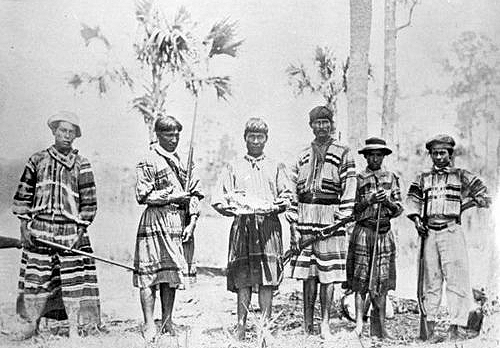 Boynton also developed an adjacent thirty acre citrus and vegetable grove to feed his hungry visitors. Hotel guests dined on area kingfish and dolphin (if they desired, hotel workers would row them out to fish for their own dinner) and local venison, turkey, quail and duck supplied by Seminole Indians.

The Boynton Beach Hotel prospered and for twenty-eight years many of the same guests returned during the popular winter season. It supplied employment for most of Boynton’s non-farming locals and was the winter residence for Major Boynton’s family. The books and magazines left behind were donated to the Woman’s Club and helped stock the first Boynton library. 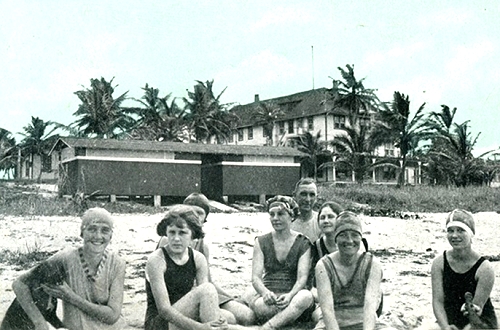 By the time Nathan Boynton died in 1911 the Boynton Beach Hotel’s clientele was firmly established and most of it was torn down in 1925 to build a more luxurious edition. It never happened. The devastating 1926 hurricane and subsequent Florida real estate bust saw to that. Today, all that remains of Boynton Beach’s most important landmark are two of its cottages.

But you’d have to scale that concrete wall to see them. 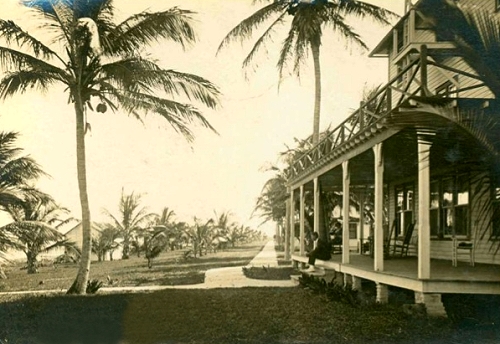